A Greek archaeologist who has been leading a 20-year excavation in northern Greece said on Thursday that he believed he had unearthed the tomb of Aristotle. 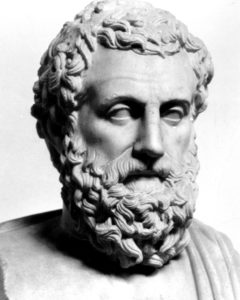 In an address at a conference in Thessaloniki, Greece, commemorating the 2,400th anniversary of Aristotle’s birth, the archaeologist, Konstantinos Sismanidis, said he had “no proof but strong indications, as certain as one can be,” to support his claim.

The tomb was in a structure unearthed in the ancient village of Stagira, where Aristotle was born, about 40 miles east of Thessaloniki. According to Mr. Sismanidis, the structure was a monument erected in Aristotle’s honor after his death in 322 B.C.

“We had found the tomb,” he said. “We’ve now also found the altar referred to in ancient texts, as well as the road leading to the tomb, which was very close to the city’s ancient marketplace within the city settlement.”

Although the evidence of whose tomb it was is circumstantial, several characteristics — its location and panoramic view; its positioning at the center of a square marble floor; and the time of its construction, estimated to be at the very beginning of the Hellenistic period, which started after the death of Aristotle’s most famous student, Alexander the Great, in 323 B.C. — “all lead to the conclusion that the remains of the arched structure are part of what was once the tomb-shrine of Aristotle,” Mr. Sismanidis said.

Aristotle, who was born in 384 B.C., was a pupil of Plato in Athens and became a crucial figure in the emergence of Western philosophy. His work forms the basis of modern logic, and his metaphysics became an integral part of Christian theology. His “Poetics” still offers penetrating analysis of what works, and does not work, in theater. King Philip II of Macedon engaged him as a tutor to his son Alexander.

CCBS Greece is an incoming travel agency that specializes in Group and F.I.T travel arranging trips throughout Greece and Europe customized to the needs of the clients. Our company is a Greek National Tourism Organization (GNTO) accredited agency with license number 1039 E 60000 02246 01